DURHAM, N.C. – One way many cancers grow resistant to treatment is by generating a web of blood vessels that are so jumbled they fail to provide adequate oxygen to the tumor. With oxygen starvation, the tumor gains a sort of cloaking device that protects it from the toxic effects of chemotherapy drugs and radiation, which are designed to seek out well-oxygenated tissue.

Researchers have long tested various approaches to improving blood flow to the tumor in the hopes of restoring potency to treatments. Not much has shown promise. 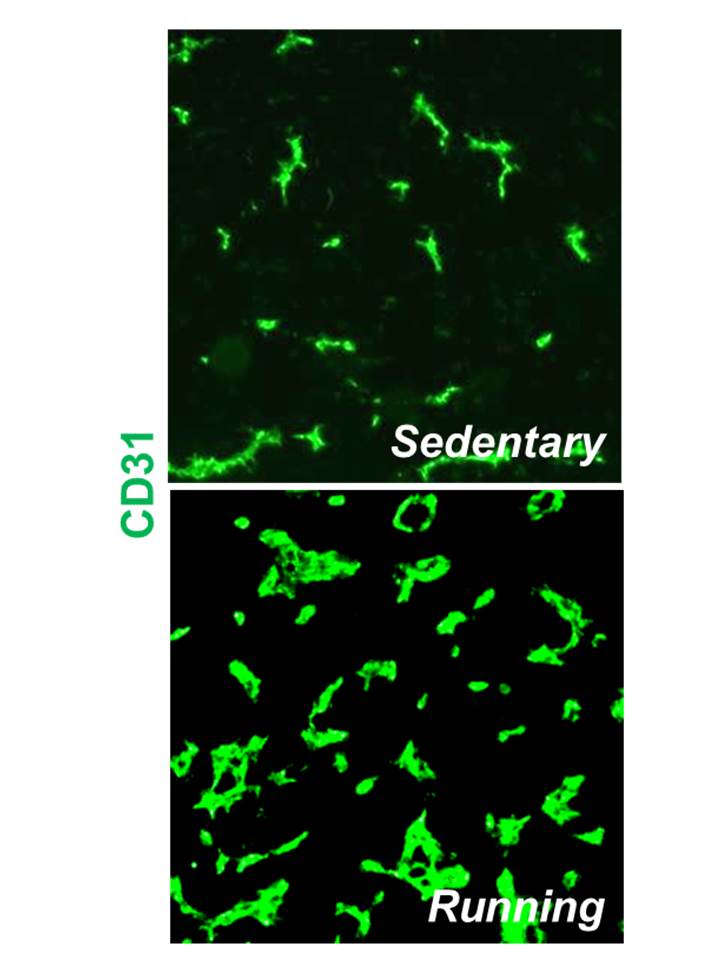 In a study published in the March 16, 2015, issue of the Journal of the National Cancer Institute, researchers led by Duke Cancer Institute (DCI) scientists studied the impact of exercise in models of breast cancer in mice. They found that exercise stimulated significant improvements in the number and function of blood vessels around the tumors, improving oxygen flow to the cancer site. When treated with chemotherapy, the tumors shrank markedly better than they did in sedentary animals.

“We set about to see whether exercise would affect the tumor perfusion, and could not have guessed that it would be as effective as it was,” said co-senior author Mark W. Dewhirst, DVM, Ph.D, the Gustavo S. Montana Professor of Radiation Oncology and vice director for Basic Science at DCI.

The researchers used two different models of breast cancer cells and implanted them in mice, then randomly assigned the animals to either exercise (running on a wheel), remaining sedentary.

Among the animals that exercised, tumor growth was significantly slower than growth in the sedentary mice, and tumor cell death was 1.5 times higher. The density of small blood vessels was approximately 60 percent higher in exercised mice compared to the controls, and oxygen transport improved, leading to less oxygen starvation of the cancer tissue. The vasculature in the tumors also looked and behaved more normally.

“We were truly amazed by these findings,” Dewhirst said. “I have spent the better part of the last 30 years trying to figure out how to eliminate hypoxia in tumors, and have looked at a lot of different approaches -- drugs, hyperthermia and metabolic manipulations. None has worked very well, and in some cases, made things worse. So these findings with exercise are quite encouraging.”

Dewhirst said future research would examine the effect of exercise on slower-growing tumors that are more typical of human breast cancers, and move to other animal models. Ultimately, however, the team is optimistic that exercise will become an important component of cancer therapy in the clinic.

“There is a growing body of work showing that exercise is a safe and tolerable therapy associated with improvements in many outcomes such as fitness, quality of life, and reductions in symptoms such as fatigue in a number of cancer types, including breast cancer,” said co-lead author Lee Jones, Ph.D., member and director of the Cardio-Oncology Research Program at Memorial Sloan Kettering Cancer Institute. “On the basis of these findings in mice, we are now designing studies to test whether exercise can inhibit tumor growth / risk of recurrence in humans. Such research will prove very exciting.”

The research team received grant support from the Department of Defense (BC093532) and the National Cancer Institute (CA40355).