DURHAM, N.C. -- When patients suffer from atrial fibrillation, an irregular heartbeat, they are at considerably higher risk for blood clots and stroke. However, when hospitalized, half of these patients do not receive medications that could help prevent such complications, according to research being presented Nov. 14 at the American Heart Association Scientific Sessions.

The medications, known as oral anticoagulants (OACs), prevent blood clots and stroke by thinning the blood. Analyzing 1,579,456 hospital admissions of atrial fibrillation patients across 812 hospitals in the United States, a retrospective study led by researchers at the Duke Clinical Research Institute found that just 46 percent of these inpatients received a blood thinner at discharge. 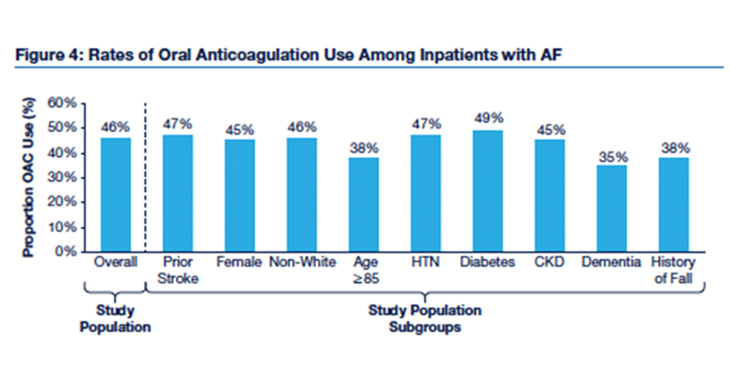 “This low rate of OAC use in hospitalized patients highlights an important opportunity to improve care in atrial fibrillation patients,” said Sean Pokorney, M.D., M.B.A., a study co-investigator and an electrophysiology fellow at Duke University School of Medicine.

Patients included in the study were treated for atrial fibrillation during a hospitalization between January 2010 and June 2015 and were drawn from the Premier Healthcare Database, which includes data for 1 in 5 discharges in the United States. Study patients were at least 40 years old and stayed in the hospital for at least one day. They also had a stroke risk score of two or more and were thus candidates for treatment with an OAC, according to guideline recommendations from the American Heart Association and American College of Cardiology.

“However, in certain cases, it may not be safe for patients with a high stroke risk score to take blood thinners because of complications that could arise,” Pokorney said. “Still, we think 50 percent is too low and that there are thousands of preventable strokes happening in the United States each year because of the low rates of OAC usage.”

Pokorney noted that use of OACs hovered just below 50 percent across several subgroups in the study, including women, diabetic patients, and those with a history of stroke. He added that the study is significant because it focused on the inpatient setting, whereas previous research on OAC use focused mostly on the habits of atrial fibrillation patients outside of the hospital setting.

“This study identified a gap in care and is a critical first step in raising questions about how we can optimize the OAC decision-making process that atrial fibrillation patients and their providers are engaging in during a hospital stay and at the point of discharge,” Pokorney said.

He and co-investigators hope to conduct further research to determine what barriers to OAC use might exist. Pokorney said possible barriers could include:

The study’s database showed whether patients were provided an OAC during their hospital stays. For the purposes of the study, the researchers assumed that those inpatients who were on an OAC within 24 hours of hospital discharge were also prescribed an OAC upon discharge. However, there was no way to verify that a prescription was indeed made or filled after discharge. Additionally, although the researchers tried to exclude patients who were not candidates for OACs because of the risk of complications, there is the possibility that some remained in the study’s sample.

The study was supported by Janssen Scientific Affairs. Some of the authors report financial relationships with Janssen. Full disclosures are available upon request.